Home Press Releases 1 in 5 Remote Overtime Workers Will Not Be Paid, Estimated $5,626... 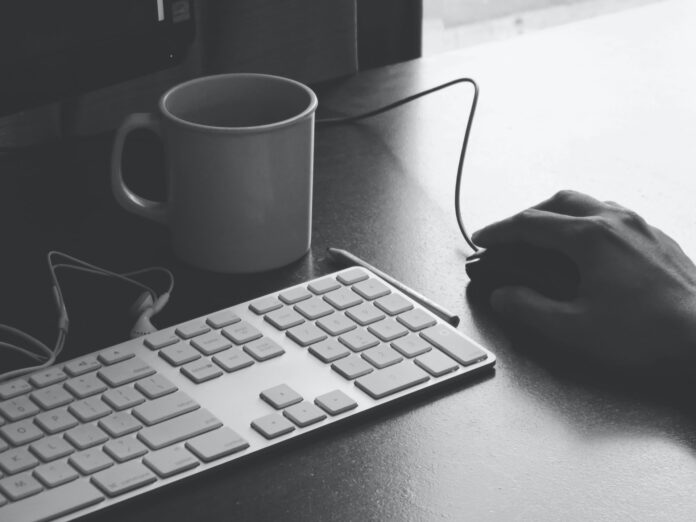 Since the pandemic started, 42% of workers are working overtime, 20% of them will do it for free, losing an estimated $5,626 a year – that’s according to a recent study by Self Financial which reveals how much unpaid overtime Americans are now doing.

One study from 2020 revealed that the average American is expected to work an extra 7 hours every week due to the pandemic and the demands caused by the new working environment. New research by Self Financial analyzed this further to understand what was causing people to work longer hours and how it has affected their lives. 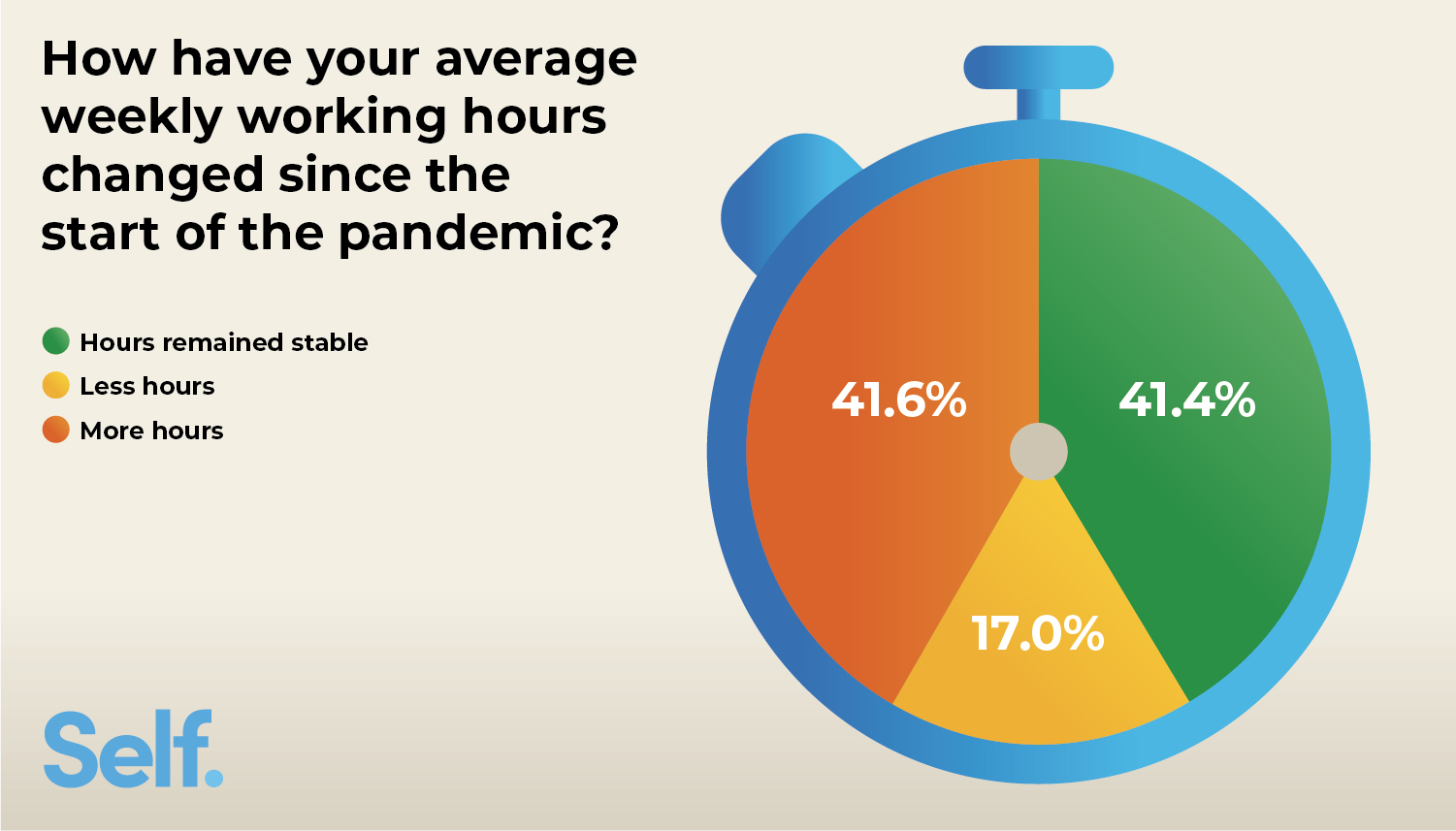 Overall, 42% said they were working more hours since the pandemic started, alongside 41% who stated their average weekly hours had remained the same throughout. Only 17% were working reduced hours due to the virus.

Based on current employment figures, this would mean up to an estimated 62.637 million people are working extra hours every week due to the pandemic.

Of those who stated they worked overtime, 28% said they worked 3-4 hours, while 27% said they worked 5-6 hours extra a week. These findings were similar to the National Bureau of Economic Research’s data from July 2020 which found that people were working an extra hour a day. 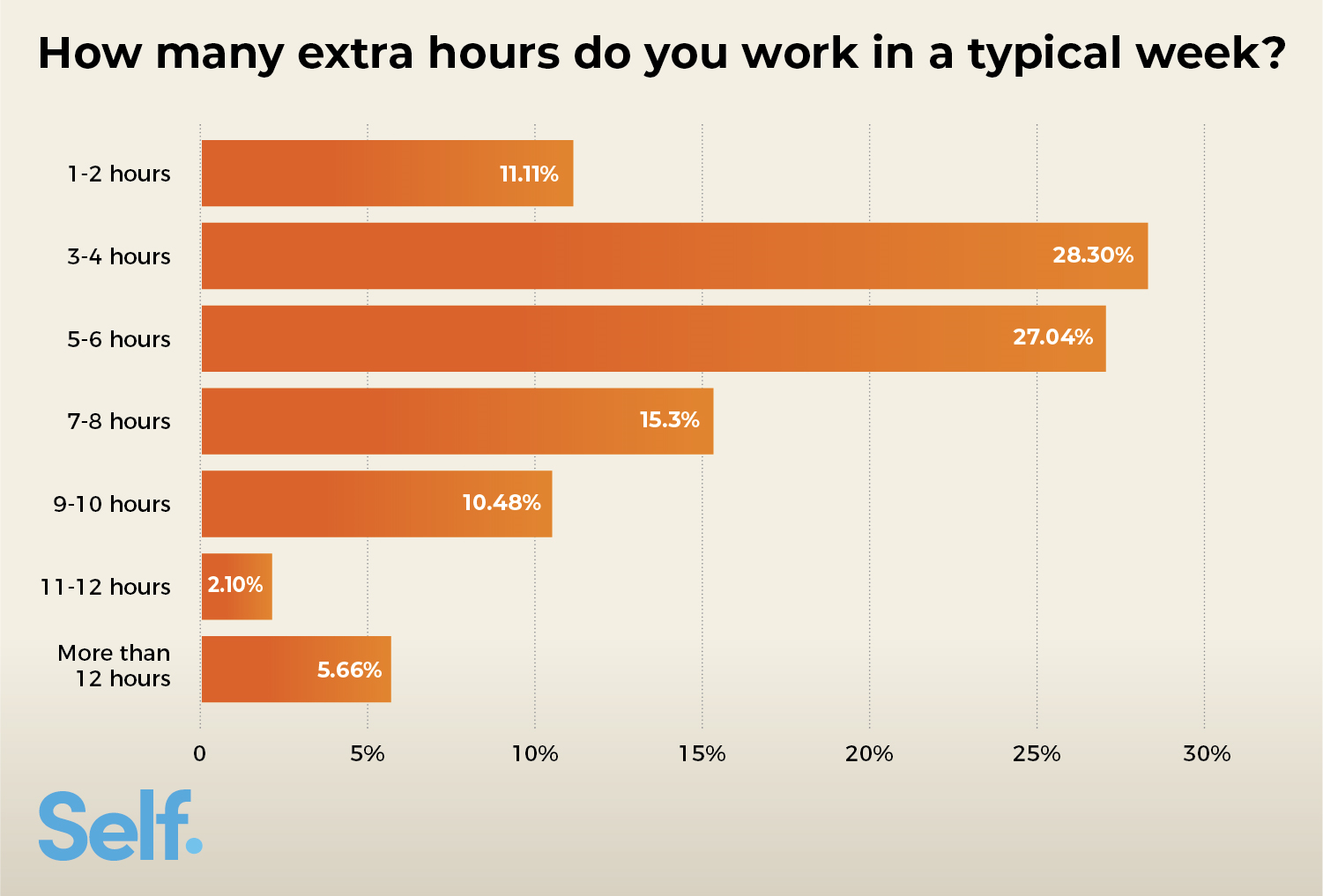 Taking a 4.5 hour weekly average from the 3-6 hour majority time, Self Financial worked out that the average employee from the dataset (on a $50,000 salary) would work an extra $433 a week. Currently, the Bureau of Labor Statistics places the average salary at $51,000.

Further questioning revealed that 1 in 5 of these overtime workers do not expect to get paid for their extra hours. This means that for those who don’t get paid, working an average salary, they would work $5,626 a year unpaid.

Factoring in official employment figures for 2021, this would equate to an estimated 12.53 million of the American workforce who will work overtime with no compensation. Financially, this will mean an estimated $70.48 billion will be worked for free over a year due to unpaid overtime.

Why are people working overtime?

When asked why they were working more overtime, the most common reason (44%) was that work was taking longer when working from home. The other reasons for overworking were as follows:

The effects of overworking

This survey found similar findings, with 98.9% stating they had faced at least one negative impact of overworking.

Almost half (46%) said that they had increased stress, the most common impact of overworking. With 31% stating they felt exhaustion, 30% said they faced anxiety, 28% stated feeling overwhelmed, and 25% said they had felt depressed.

The other reasons given by respondents are shown in the following graph: 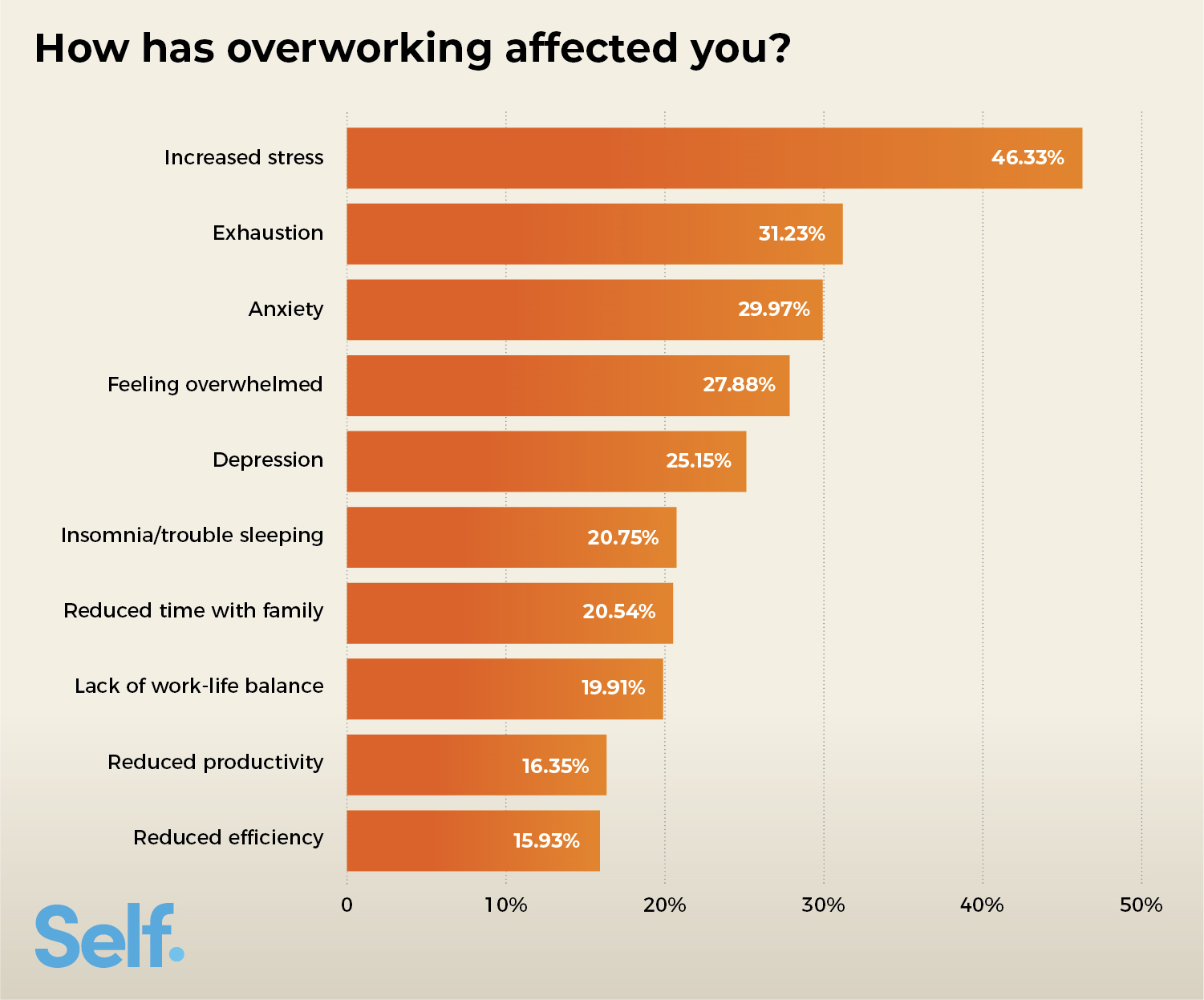 Self also spoke to the 17% who indicated they were working fewer hours to find out how their lives had been impacted.

When asked about their primary reasons for their hours reducing, most (59%) of our respondents said their work had reduced capacity or was simply not available.

Other reasons given were:

Of the group who indicated they had their working hours reduced, 75% said they had experienced an impact on their wellbeing (either positive or negative) due to reduced hours.

The most common impacts people reported on their lives were increased stress (38%) and anxiety (30%), but respondents also acknowledged they did have increased time with their family (22%). The full reasons are given in the following graph: 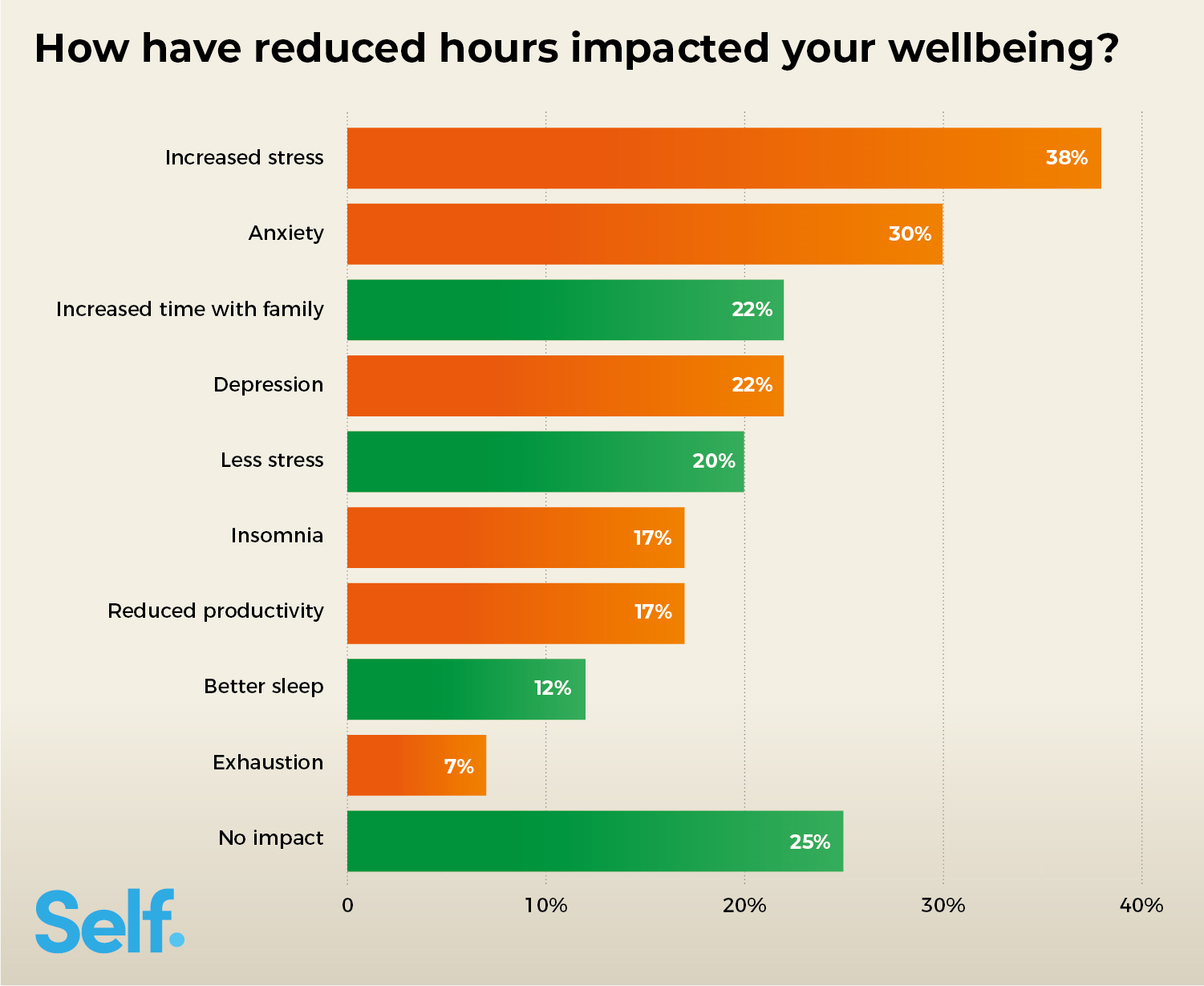 From the survey, just over half (52%) stated they had dependent children that had affected their remote working situation. Of this group of parents, 73% said their childcare duties had increased, 22% said it stayed the same, while 5% said it had decreased.

Coupled with extra hours, some parents could be working an extra 8 hours a day on both work and childcare commitments.

Finally, the remote workers in the survey were asked how their commutes had changed.

36% said that they are saving 7.5 hours on commuting each week based on an average 1.5 hours a day for 5 days.

Another third (33%) said they are saving less than an hour, while 16% indicated between 2-3 hours each day.

Lauren Bringle, Accredited Financial Counselor, at Self Financial, had this to say on the research:

“Unseen overtime that isn’t paid but is a debt to your own personal life is a challenge many face when trying to juggle work demands during a troubling economy. If possible, people should always request overtime be paid and raise any issues with their necessary departments. It’s important we all remember to look after our health and wellbeing at this time.”

“For those that were able to get paid overtime, remember to focus on emergency savings and paying down any debts you may have. With the next 12 months still somewhat uncertain a financial safety net is more important than ever.”

To view the full study and findings please visit:https://www.self.inc/info/unpaid-overtime-analysis/

About Self Financial
Self Financial (https://www.self.inc/) is a fintech company based in Austin, Texas, dedicated to helping people build credit and save money with a range of financial products.

Additional commentary and insights from Self Financial and other experts can be provided on request.

The respondents stated they worked in a range of company sizes, with most in medium-sized businesses:

In terms of gender, 54.9% of our respondents identified as male, 43.9% stated female, with 1.2% choosing not to say or identifying as ‘Non-binary’ or ‘Agender’.

Imagery and attribution
All images from this report may be used and republished with attribution to Self Financial, and hyperlink back to this page. You can access high-res graphics for download in this Google Drive folder:  https://drive.google.com/drive/folders/1gluOD9fXRlz5UX5RIRxD4MDbYlrKL6Ek?sp=sharing

AMS Partners with WayUp to Offer Clients Exclusive Access to a Robust Source of...

ABOUT US
Your source for staffing industry intelligence. Find the latest interviews, insights, and analysis at StaffingHub.
Contact us: press@staffinghub.com
FOLLOW US
© Copyright 2021 - StaffingHub
Share This
MORE STORIES
What Employees Want