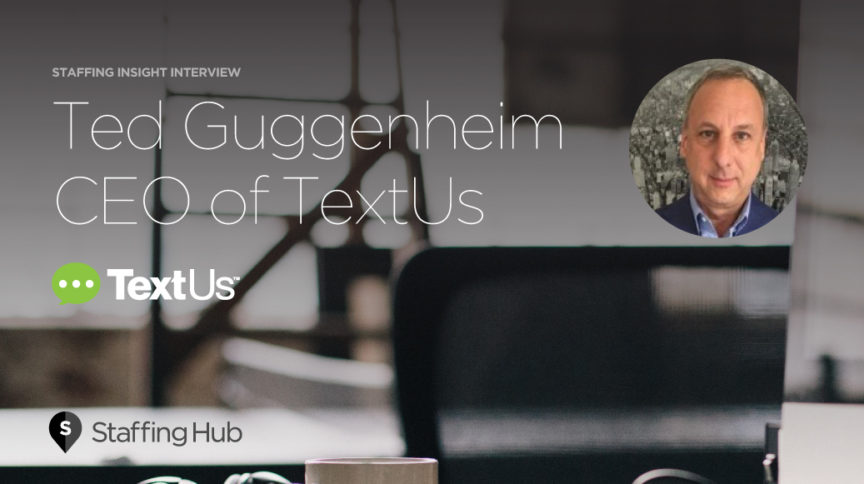 In our quest to provide insight into all areas of the staffing and recruiting industry, we’re launching our industry suppliers interview series. For our first interview, we sat down with Ted Guggenheim, CEO and Co-Founder of TextUs, the business texting platform built for the staffing/recruiting and HR industries. He shared his thoughts on industry challenges, the importance of quick communication, and the future of candidate expectations.

“That was the ‘aha moment,’ when we realized text messaging was a sales acceleration tool.”

We started TextUs in 2013 because we noticed that a lot of salespeople were business texting from their personal phones. Salespeople had discovered that their text messages would be read, and they would be exponentially more likely to get a response. So, we focused on a building a business texting solution.

Early on, we assumed TextUs would target small businesses — salons, spas, auto repair shops. However, in 2015, we hired our first full-time salesperson, Erich Hugunin, who had a strong background in staffing and recruiting. He realized immediately that the staffing and recruiting industry would find real-time text communication extremely valuable. We saw tremendous success with our first staffing clients, initially in healthcare recruiting. That was the “aha moment,” when we realized text messaging was a sales acceleration tool.

“Text messaging brings a level of immediacy that you can’t get from phone or email.”

We quickly realized that when you’re trying to reach individuals who are on the go or working at a job site, they often aren’t able to talk on the phone or read through their emails. But they can definitely find time to respond to a text. Text messaging brings a level of immediacy that you just can’t get from phone or email. Frequently in sales, you simply want a yes, a maybe, or even a no. At least with a no, you know not to waste your time trying to engage a candidate who isn’t available or interested. With a yes, you get a green light to initiate the sales process.

The recruiting firms we were talking to in the beginning instinctively knew our platform would be effective. Because their best closers were already using their personal cell phones to connect with candidates, they knew they would get a response. They also recognized how TextUs solved the limitations of using their own devices by allowing you to integrate with your CRM or ATS, type quickly on a keyboard, and send personalized broadcast messages to up to 100 candidates at a time. Even better, TextUs is also able to use the salesperson’s existing business phone number as their text number, delivering a totally seamless voice/text experience.

“People don’t mind job offers or other engagement if they feel the person contacting them is simply trying to start a conversation.”

The first challenge staffing agencies came to us with was how to communicate with a lot of people at once but maintain a personal touch. They asked, “How can we send out a message to 50 candidates but make people feel like they’re talking to a person, not a robot?” If it seems automated, contacts respond negatively. TextUs isn’t a marketing system, it is a platform for engaging in a one-on-one conversation.

That’s why we have such a low opt-out rate. People don’t mind job offers or other engagement if they feel the person contacting them is simply trying to start a conversation.

“Providing the in-depth analysis our customers were asking for was a game-changer because we could show the yield that text messaging offered, right off the bat!”

Executives saw that, with TextUs’ analytics and reporting, they could get a direct window into recruiter usage and success. They could assess who was closing deals and who wasn’t. And they could also see how they’re closing deals, what channels of communication they’re using (email, voice, text), and what messaging worked. Providing the in-depth analysis our customers were asking for was a game-changer because we could show the yield that text messaging offered, right off the bat!

“Speed of communication is critical to a staffing agency’s success.”

Today, the biggest issue we hear from our customers is that the job market is very tight. There is enormous competition between staffing agencies to find even find qualified, available talent, let alone get their attention.

When recruiters can get immediate engagement and communication going with a qualified candidate, speed is absolutely critical. If they don’t act fast, they’ll lose them to other agencies. So what we’re seeing is that the speed of communication is critical to a staffing agency’s success. And because texting speeds up the communication process by 8x – 10x, agencies recognize that it helps them perform better in a very tough job market. A lot of agencies see the competitive advantage because they can get candidates onboarded and hired much more efficiently than they can with phone calls and email alone.

“In the next two years, we believe text messaging will become the preferred method of communication between staffing agencies and their candidates.”

More and more, Millennials won’t even listen to voicemail. And many candidates aren’t ready for a phone conversation — they may even find it far more intrusive than a text. They’re working, they’re busy, they don’t want to get tied up by a phone call. But they will respond to text. In the next two years, we believe text messaging will become the preferred method of communication between staffing agencies and their candidates. TextUs is not a replacement for phone calls or emails, it’s an accelerator to the communication tools that people are already using.

“We’re going to spend the next few years focusing on how our software can benefit HR departments of large companies.”

We’ve discovered that a lot of large companies who are hiring like crazy need to speed up their communication. The job market is so tight that if they wait too long, they’ll miss out on opportunities. So, we’re going to spend the next few years focusing on how our software can benefit HR departments of large companies.

While our initial success has been in staffing and recruiting, we will continue to explore how TextUs can be used for inside sales. Customers of ours like MINDBODY have seen huge success with our software. B2B and B2SMB have similar communication needs — they just need a yes, no, or maybe. They want to communicate just as efficiently as recruiters.

“Modern publishing sites like StaffingHub are being introduced to provide valuable, current content to the industry. It really separates the wheat from the chaff, the helpful information from the old news.”

I think that the staffing industry has a very nepotistic culture. Everyone seems to knows everyone and competes against one another on various levels. It’s an extremely large industry, but it operates like a much smaller category because the barriers to entry are fairly small. You have a lot of the same people looking at the same information, in the same way they have for the past 20 years.

But things change rapidly today. Sources of information change and quality of information evolves. That’s why modern publishing sites like StaffingHub are being introduced to provide valuable, current content to the industry. It really separates the wheat from the chaff, the helpful information from the old news. It can much more efficiently dissect, interpolate, and reproduce the really relevant information that might get missed in more traditional association news and other stale publishing sites.

Headquartered in Boulder, CO, TextUs is the only business-class two-way text messaging technology built specifically for inside sales, staffing, and recruiting teams. TextUs is dramatically changing how professionals communicate with their candidates, leads, and opportunities. With eight times the response rate of traditional communication channels, TextUs empowers salespeople and recruiters to sell smarter and faster.

To learn more visit www.TextUs.com or connect with us on Facebook, @TextUsBiz, and on LinkedIn.